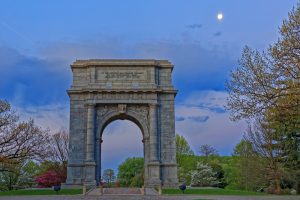 Less than 25 minutes from our Spring Mill apartments is a destination where visitors can experience the story of freedom in Philadelphia.

We are talking about Independence National Historical Park, and it preserves several sites associated with the American Revolution and the country's founding.

The park spans 55 acres, and it's nicknamed America's Most Historic Square Mile because of the number of landmarks.

Step inside the Germantown White House to see where George Washington took refuge in 1793 during Philadelphia's deadly yellow fever epidemic. He also stayed here the following summer to escape the heat of the capital city. Construction on the home began in 1752, and tours are offered every thirty minutes. Guests can also visit the nearby Bringhurst House for a look into the life of George Washington and his household.

Established by William Penn, Washington Square features the Tomb of the Unknown Soldier of the American Revolution. In the park's early days it was claimed as a burial ground and pasture. In 1815, a public walk was installed, and ten years later, more than 60 species of trees were planted. Today, it's a popular gathering place for locals and visitors alike.

The Dolley Todd House was the home of future First Lady Dolley Madison. It's where she lived with her first husband, John Todd, between 1791 and 1793. Constructed in 1775, the house depicts the lifestyle of the middle class in eighteenth-century Philadelphia. Free, timed tour tickets are available at the Independence Visitor Center. The tours are limited to ten people and take about an hour.

If you would like to live near the Independence National Historical Park, please contact us. We would love to give you a tour of our Conshohocken apartment community where you can see all we have to offer.