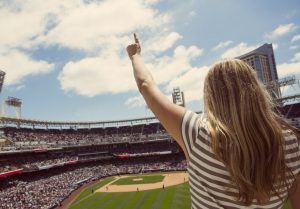 Enjoy an Evening of Baseball at Citizens Bank Park

The dawn of a new era for the Phillies began in April 2003 when Citizens Bank Park opened its gates.

Today, the stadium is called one of the best ballparks in the country. With stunning skyline views, unique architecture, and bowl-style seating, it's no wonder that Citizens Bank Park has earned this designation.

Located close to our apartments in Conshohocken, there's plenty to take in. Highlights include:

Named for Philadelphia Phillies legend Richie Ashburn, Ashburn Alley is open to all fans two hours before the game. Visitors can watch batting practice and enjoy delicious treats featuring a Philadelphia flavor. The Alley also features the Budweiser Rooftop Bleacher Seats. The stadium brought back the rooftop bleachers which originated in Shibe Park during the Roaring Twenties when residents of 20th Street built such seating on top of their roofs. Just under 200 guests can enjoy the game from this unique area under the Liberty Bell.

Found in the Hall of Fame Club, the Cooperstown Gallery features paintings of the Phillies' Hall of Fame Players. There are also works depicting the athletes from the Philadelphia Athletics and Native Sons.

Citizens Bank Park features everything from hot dogs to healthier fare. The stadium has also been named the number one ballpark six out of the last seven years for vegetarian dining.

Fans who want to learn more about what happens behind-the-scenes should take a ballpark tour. They're held throughout the year on both game and non-game days. Tickets are just ten dollars for adults and must be purchased in advance. Highlights include the Phillies dugout, media room, and broadcast booth.

If you would like to live near Citizens Bank Park and other exciting attractions, please contact us. We would love to give you a tour of Courts at Spring Mill where you can see firsthand all our community has to offer.